In celebration of five decades of music education scholarships, supporters and music lovers filled Bower Chapel on February 29, 2020 for the Going for Gold concert.

Twenty musicians, many working professionally who previously were awarded scholarships, gathered from all over the country and even Canada to celebrate the milestone. The awards each musician received launched their eventual careers, giving them opportunities early on to receive lessons, purchase instruments, attend camps and master classes, and hone their musical skills. Many of the professionals took the opportunity to show their gratitude to the foundation for the encouragement, guidance, and support they received. 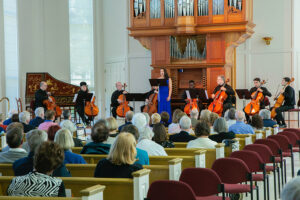 The second half of the program was opened by Misty and Cassie Drake, members of a very talented family who have found success with the foundation for many years. They were followed by cellist Jared Blajian.  A highlight was the Pie Jesu, Opus 48 by Faure played by Oliver de Clercq, principal horn of the Vancouver Symphony and the first recipient of the Music Foundation’s Turiel Award for best overall senior winner.  The concert finale was pianist Priscila Navarro leaving the audience breathless with her performance of Franz Liszt’s Spanish Rhapsody.

The event was chaired by Myra Williams alongside honorary co-chairs Myra Daniels and Maestro William Noll.